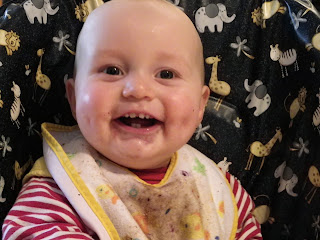 Something is going on with my little Julian.

Last week he developed a fever and started vomiting.  The vomiting lasted for only 12 hours but the fever dipped and spiked for 4 days.  He was not at all interested in solid food while he was sick and he nursed on demand, staying hydrated and sleeping fairly well.

As the fever passed he became interested in food again and in the last few days he seems to have lost interest in nursing.  Completely.

I am confused and scared about this new development.

When I offer to nurse him--usually when he is ready to nap--he will latch on, but only for a couple of swallows and then he throws back his head and starts to cry.  After I settle him he will try to nurse again, but it lasts for only a few (sad) seconds and then he sucks his thumb to fall asleep.

In the night he will seek me and want to nurse, but usually he is latched on for only a few swallows before choosing his thumb to fall asleep with again.

He also seems to have changed his latch:  He is not effectively using his tongue to cover his bottom teeth and make a good, deep latch.  The result is extraordinary pain for me as his top and bottom teeth grind and tear as he nurses.

And the final problem is that practically overnight I have totally lost my milk supply.  I'm stunned that in just a few days of nursing less my body has nearly turned off milk production.  Maybe my body is just telling me that it is worn out from producing milk for 80 of the past 85 months?

So there are actually 3 problems:
Not one to sit around in confusion, I am trying to work out some possible solutions.

Lack of Interest  I am continuing to nurse on demand for as long (or short) as Julian wants.  But whereas I used to be content to let him sooth himself with thumb first, I will now offer to nurse first in the hopes that he might want it.  And when he nurses for only a few swallow, I will smile my encouragement and make sure that he knows how much I enjoy nursing him and cuddling him.  In short, I will make nursing a more mindful activity and I will include more affection.

Pain due to Poor Latch  I have been primarily nursing in the side-lying position since Julian was born.  Since we don't go out much, this is pretty easy.  It also means that there are few distractions for him while nursing because I have usually taken him into the bedroom (away from his sisters).  Now, I am trying to nurse him every position:  cradle hold, football hold, sitting upright with him straddling my lap, and with him on his back and me above him.  By changing positions with every feeding I am not letting his little teeth gnaw on the same spot over and over and thus my body is able to heal a little bit between feedings.  Already, this has helped A LOT.

I have also considered that perhaps his poor latch is due to teething pain.  He already has 8 teeth, but he might be working on his 1-year molars so I am giving him Camilia, a homeopathic remedy for teething.  Not sure yet if this is working.

Sudden Reduced Milk Supply  When your baby is a newborn, the key to getting a good milk supply is to let the baby suckle at the breast often and long.  When the baby is 10 months old and seems to be loosing interest in breastfeeding, there are two solutions:  stimulate the breast by pumping or use an artificial augmentation.  Since I don't own a breast pump, I chose to start drinking Fenugreek Tea which I have used in the past to increase my milk supply.  So far, so good!  The Fenugreek Tea produces a more rapid letdown which gets Julian more interested in continuing to nurse.

AND, as a final attempt to fix these problems, I have booked an appointment with Dr. Jack Newman.  Do you know of him?  He is a world-renowned breastfeeding expert and he has a clinic right here in Toronto just a few miles from my home.  I'll be sure to report back with his suggestions.

Are you asking yourself:  If her baby seems interested in weaning at 10 months, why is she trying so hard to keep him nursing?
When I talked to my mother about what is going on with Julian, I told her that if he weans right now I am going to need counselling because I will be SO SAD.  Let's hope it doesn't come to that!

Maybe Julian and I are just going through a change.  And maybe I am strong enough to meet his needs and surround him with my love no matter what happens.
Posted by Patti