Well, that was me.  Until I became a mother.  Now I know that I don't know very much of anything and everyday brings new challenges and new questions.

I graduated from a 5-year highschool program in 4 years.  Then I independently financed my way through 4 years of university, graduating with two Bachelor degrees:  One in French and one in Education.  For 5 years I taught Grade 8 French, Math and English at the biggest inner city school in Toronto.  I was also working on a Masters of Education and I was getting ready to enroll in courses to become a school principal.  Looking for even more challenge, I transferred to a smaller school to teach at the Grade 6 level.  There, I met Partner-Guy.

Ours is not exactly your typical love-story.

We dated off-and-on for a year and then with absolutely no thought whatsoever we decided to have a baby.  Then we broke up.  Then we bought a house about 6 weeks before our daughter was born in April 2004. 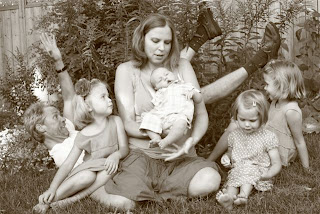 And guess what?  Somewhere between baby #2 and baby #3, I fell in love with Partner-Guy!  It just proves that you just never where your life is going to lead you....