How Does Your Garden Grow: A Response from The Gardening Coach

Last week I posted an update on my gardening attempts.  My Gardening Coach, Steve Biggs, wrote back with a response.  His advice is in PURPLE beneath each picture.

ZUCCHINI: The roots on these seedlings seem to be barely attached to the stem. Not sure what’s going on. 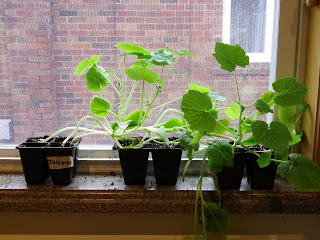 ﻿ THESE PLANTS ARE READY FOR A BIGGER POT, MAYBE A 4” POT. PLANT A WEE BIT DEEPER WHEN TRANSPLANTING. THESE ARE SPINDLY, BUT IF YOU “HARDEN” THEM OFF WHEN THEY GO OUTSIDE, SHOULD DO JUST FINE. AND YOU CAN ALSO DIRECT SOW ZUCCHINI IN THE GARDEN. ADVANTAGE TO STARTING INDOORS IS SIMPLY AN EARLIER HARVEST.


CUCUMBER: These seem strong although some of the leaves are a little yellow. Probably not getting enough light, as they are often covered by the zucchini leaves. 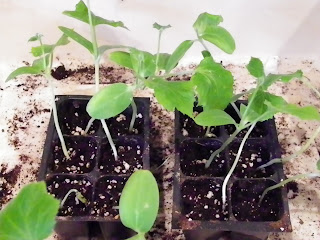 ﻿ YELLOW LEAVES IS VERY OFTEN A CRY FOR FOOD, AND AS THEY’RE IN SMALL CONTAINERS IT COULD BE THE CASE. PUT IN A 4” POT. THESE AND THE ZUCCHINIS CAN BE HARDENED OFF OUTDOORS STARTING ANYTIME (AS LONG AS YOU BRING THEM IN ON COLD NIGHTS OR COOL WEATHER) BUT DON’T TRANSPLANT INTO THE GARDEN TILL AFTER MID MAY


BASIL: The pot on the left has had several seedlings selectively removed. Perhaps the other two pots need the same treatment? And how many basil plants does a girl actually need, I'd like to know. 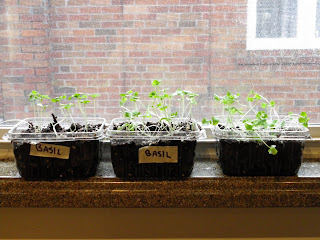 ﻿ YES, THINNING WAS THE RIGHT THING TO DO WITH THE POT ON THE LEFT. GROW LOTS IF YOU LIKE DRIED BASIL—OR WANT TO MAKE PESTO AND FREEZE IT. WE USUALLY HAVE A DOZEN POTS OF BASIL

﻿ EGGPLANT: These seeds were planted the same day as the zucchini. Could someone tell me why they are so spindly and pathetic? 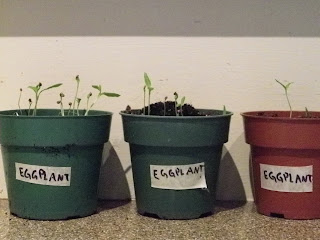 ﻿ EGGPLANTS ARE ALWAYS PAINFULLY SLOW….IT’S NOT YOU. MINE AREN’T MUCH BIGGER. BECAUSE THEY DETEST COLD YOU’LL PLANT THEM IN THE GARDEN IN LATE MAY, SO YOU HAVE TIME

﻿
PEPPERS: I am totally proud of these seedlings. They were all planted in the centre pot but Steve told me they would need to be transplanted once they had 4 leaves each. So far, so good! These babies are so strong I could sell them!....Hmmm, maybe a plan for some income next year.... 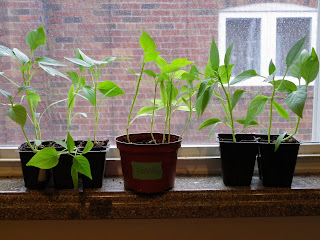 ﻿ LOOKS GREAT! SO AT THIS POINT YOU CAN PUT THEM ONE TO A POT.


PARSLEY: Help! These leaves are ready to harvest and they haven't even gone outdoors yet! 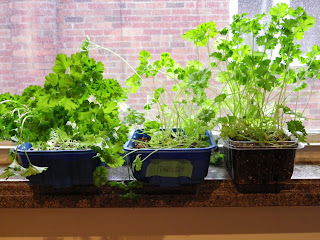 ﻿﻿ WAY AHEAD OF MINE, I’M ENVIOUS! NO REASON YOU CANT HARVEST SOME LEAVES NOW. YOU CAN HARDEN THESE OFF NOW, AND TRANSPLANT AFTER YOU’VE HARDENED THEM OFF FOR A WEEK OR TWO.

﻿﻿ Wow, isn't Steve awesome?  If you live in Toronto, contact him.  Really.  And sign up for his newsletter.  You won't regret it.

LEEKS: More water is not helping these little guys. More sun, maybe? Or maybe they were supposed to be thinned out? 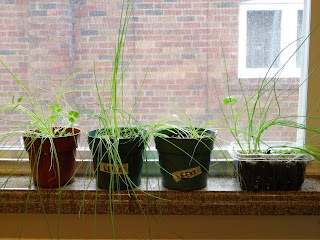 HARDEN OFF LEEKS NOW. THEY CAN GO IN THE GARDEN ONCE HARDENED OFF. (MY YARD IS FLOODED…SO MINE ARENT’ PLANTED, BUT I WISH THEY WERE!) THEY COULD EVEN HAVE GONE IN A COUPLE OF WEEKS BACK
Posted by Patti

Email ThisBlogThis!Share to TwitterShare to FacebookShare to Pinterest
Labels: The Green Life