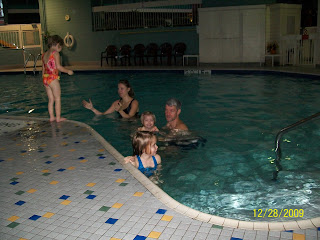 On December 28 we went to the Holiday Inn in Burlington to spend the night in honour of Holly's 4th birthday which was on New Year's Eve. She had requested this trip in lieu of a gift and she was familiar with this hotel as we have stayed there before when Partner-Guy ran a race in Burlington. The highlight of the trip for her was going to be swimming in the hotel pool and eating at the buffet.

So swim we did. Four times in just under 24 hours in fact.

Our girls have had lots of experiences at our local school-pool which is open for public swimming on Saturday afternoons. They have consistently declined to participate in swimming lessons, which is fine with us, although I thought after seeing how well their boy-cousins (ages 9 and 6) can swim that they might have asked to learn, but so far they have been content to splash around in the shallow end and to jump into the water only when caught by their parents. Holly enjoys jumping into deeper water and playing with her dad, while Anna prefers to play independently with flutter boards and to jump into water that will not be over her head. Jasmine is content to just be carried around.

One of the lifeguards at the local pool is a former student of mine, a very nice young man now in his second year studying engineering at U of T. He has always been friendly to us and our daughters and many times he has tried to encourage Anna to jump into deeper water or to try to swim with the flutter board. Anna is totally not interested in his approach and though he is genuine and sincere in his efforts to help her, I have had to tell him that we aren't interested in pushing her to learn how to swim. I told him, "She will learn when she's ready and motivated. There's no hurry. She's only 5." He laughed. "Only 5?! I teach swimming to 5-year-olds who can swim across the deep end." I had to respond, "It's not a competition."

And truly that is how I feel about it. Childhood is not a competition to see whose kids can whiz through their milestones the fastest. It is important to me that all of my children become proficient swimmers, both for safety and for recreation. But like learning to walk or to eat with a fork, I believe that they will learn to swim through practice, not through formal lessons. And should one of them demonstrate a great interest and proficiency in swimming, then we will seek someone with a greater skill than either Partner-Guy or I possess to help our daughter achieve her full potential in swimming. Just like we would do if one of them is a gifted artist or musician or gardener or humanitarian.

Nevertheless, I admit that it is sometimes hard to see other children, Anna's age or only slightly older, who are incredibly proficient at a learned skill such as swimming. There was one boy at the hotel pool, perhaps only six or seven years old, who was swimming alone in the deep end while his father sat in a lounge chair reading the newspaper. That father won't win any parenting awards from me, but I was pretty impressed by the skill and confidence of the boy as he swam and dove.

By our third trip to the hotel pool Anna was becoming frustrated that the water got deep very quickly, resulting in a very small shallow end in which to play independently. Partner-Guy and I were also getting a little tired of having to constantly hold both Jasmine and Holly who could not touch the bottom at all. We had tried putting them in life jackets on other occasions, but life jackets are not designed for swimming in and the girls find them very uncomfortable. In a sudden burst of brain-power I thought of tying a pool-noodle under the arms of each girl to make them more buoyant.

Well, what an inspiration that turned out to be. Anna and Holly could each jump in without needing to be caught and it only took Jasmine a minute to figure out that she could dog-paddle herself from one side to the other (a distance of about 12 feet) and then turn around and paddle back.

Suddenly everyone was swimming. Anna decided that she could jump into deep water since she would come right back up and her confidence soared. She began racing with Jasmine from opne side of the pool to the other shouting "I can swim. Look at me! I'm swimming!" And Holly would stand on the side of the pool and fall in backwards, creating a huge splash and loving every minute of it. Sometimes Holly's confidence and bravado are bigger than her skill, but this was one time when it all came together perfectly.

The suddenness with which all three girls were confidently and independently swimming (albeit with the help of pool noodles) gave me a real insight into the importance of trust as a factor in our relationship with life and learning. For us as parents to decide that it is important to us that our children become good swimmers and then to not seek any formal instruction requires a substantially high degree of trust that they will each someday become motivated and ready to swim independently. But it also requires a big dose of involvement. Dropping a child off at a one-hour swimming lesson is a very different kind of commitment to their learning than actually being in the pool with the child every Saturday afternoon. Partner-Guy and I aren't heroes, but we certainly aren't side-line parents, either.

So the mini-holiday at the Holiday Inn was a great success. Holly swam to her full heart's content, and Anna and Jasmine also had a lot of fun. And we the parents got to experience the joy of seeing the enthusiasm and confidence of our children in all of its realness. What a treat.
Posted by Patti

Email ThisBlogThis!Share to TwitterShare to FacebookShare to Pinterest
Labels: Fulfilling your Potential, Trust