On Sunday Anna organized a shopping trip with her dad and her two sisters.  She made an itinerary, a shopping list for each person and a budget.  Significantly, she emptied the Money-Jars belonging to her and her sisters onto the table and then divided up all the money equally between the three girls. 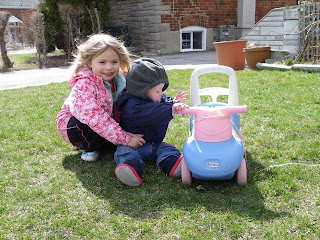 When the trip was completed (and when Daddy was sedated with a coffee after trekking through 2 stores with 3 little girls) the sisters came home and played with their new treasures.
In the evening, while baby Julian and 3-year-old Jasmine lay down with Mommy to go to sleep, Anna (7) and Holly (5) played Go-Fish with their dad.  When I came out of the bedroom I played a few games too and at 9pm Partner-Guy and I went to the living room to fold the laundry and watch Celebrity Apprentice as is our Sunday night custom.  (And yes, I admit to watching a little bit of trash-TV once in a while!)  Anna and Holly were not interested in going to bed yet so they stayed up, playing cards together and making up new games with the little animal toys they had purchased earlier.

On Monday morning we all woke up together at 8:46am.  Jasmine got right into a new make-believe game with her new toys and Anna and Holly sat at the table with their pencils and drawing tablets while I made some breakfast and read the paper.  Julian emptied one of the bottom cupboards (hey, he has to do SOMETHING!) and when he grew bored I put him in the booster seat for some breakfast. 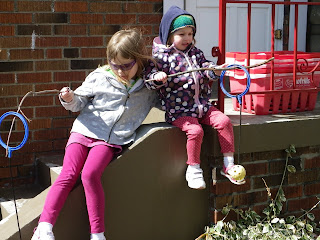 Around 10am the girls looked up from their self-chosen activities and asked for something to eat.  Later Jasmine watched a Go Diego Go DVD while I put Julian down for a nap and Anna and Holly got back into a make-believe game involving their new toys.  At some point, the two of them disappeared to our Playroom/Craft room in the basement and reappeared with a little house made out of a shoebox, some fabric and copious amounts of hot-glue.  When Julian woke up, we played outside for a while and I puttered around in my garden which is not yet planted but is still requiring my attention.
During Julian's second nap I made supper and then read several short books to the girls.  When Partner-Guy came home he took Julian outside to play on the swing and have a ride in the wagon while I went out to run 3km.
Dinner.  Baths.  Bed.  And that was our day. 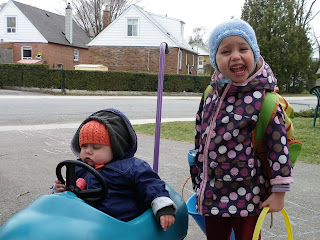 This is what Freedom and Joy looks like at our house.  And you?
Posted by Patti