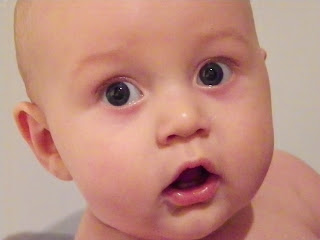 Julian awoke screaming in the middle of the night.  It was sudden.  Primal.  Scary.

I sat up quickly and held his taut little body, rocking, while he cried himself back to sleep.  Unsure of what had just happened I gingerly lay him down beside me.  He awoke screaming again a few hours later, an instant replay.  There was no mistaking the pain in his cry, but what was causing it?  I was mystified.

It was early December and Julian was just coming up to 5 months old.  He was a happy, thriving baby but over  the past couple weeks he had become particularly irritable.  He arched and cried whenever I changed his diaper.  He freaked out about putting on his snowsuit.  He stopped cuddling into me when I rocked him to sleep.

The day after the screaming episodes he was pretty normal, but after he fell asleep in my arms in the evening I tried to lay him down in the bed and immediately he awoke screaming again.  This time he didn't stop.  At midnight I resigned myself to spending the night sitting up with him in my arms.  It was rough.  And I was still stymied by his crying.

The next day, tired but coping, I noticed a change in Julian's nursing.  Which is to say:  he stopped nursing.  He barely nursed enough to keep me from being engorged, which is pretty strange at 5 months postpartum.  I knew something was seriously wrong.

I turned to my Breastfeeding Answer Book, a gigantic 700-page volume that I had purchased when I was a La Leche League Leader.  I looked up 'Fussy at the Breast' and I found an identical description of Julian's symptoms.

He had Gastroesophageal Reflux Disorder.  The acids in his stomach we flowing back up the tender tissue of his esophagus, causing extreme pain.  The arching was actually to try to pull his esophagus away from his stomach to reduce the irritation.

The book described two possible treatments:  keep the baby always upright until the symptoms disappear and offer short frequent feedings (for several weeks or months) or seek medical help and a prescription for Ranitidine which would reduce his production of stomach acids so that his little esophagus would heal.

I prefer not to give my exclusively breastfed babies ANYTHING but breastmilk (that's why we choose an alternate schedule for vaccinations).   But I also prefer to sleep laying down.  Partner-Guy and I decided that it would be best for all of us to try the drug.  So I hopped in a cab with Julian and headed to my Family Practice at Sunnybrook Hospital where a very kind doctor by the name of Purti Papneja listened to my concerns, took them seriously and prescribed the medication without further investigation.  She told me that either it would work in the next 36 hours or else Julian did not have Reflux and further (invasive) diagnostic procedures would be necessary.

The Ranitidine worked.  It is two months later and he is now taking 2mL/day, down from 6mL/day back in December.  I've tried weaning him off the drug, but we continue to need a maintenance dose almost daily.

I KNEW there was something wrong.  A baby doesn't just wake up screaming for no reason.  But I wonder how many mothers have taken crying babies to doctors who told them "Babies cry.  Just put him down.  He'll grow out of it."  Many, I suspect.

Mothers, you have to trust yourselves.  When your baby cries in a completely different way or at times when she's never cried before, something is wrong.  Trust your baby.  Trust yourself.
Posted by Patti