We travelled by train to Ottawa, leaving Union Station at noon on Friday and returning around 5pm on Sunday. When we take little trips, we mostly stay in hotels for only one night, and our last 3-day trip was to Niagara Falls, about 2 months before Jasmine was born.

We decided to go by train because the drive would have been impossible: our children do not sit for 6 hours in carseats. And we could have picked a closer destination, but we chose Ottawa in order to visit a friend of mine who moved there 2 years ago, and also because I thought the girls would enjoy seeing the Tulip Festival. The purpose of the trip was not to be a history or civics lesson, that's for sure.

We spent just 2 hours at Parliament Hill on the Saturday morning. Anna enjoyed the vast expanse of grass to run on while Holly played with her little stuffed fox among the tulips. Jasmine enjoyed a snack on the lawn. We did not go inside. When we asked the girls if they wanted to go for a walk along the canals, they asked to go back to the hotel pool instead. No problem.

Holly, as you can see from the picture below, became quite proficient at jumping into the water and then swimming along the surface until one of us fished her out. It was quite impressive actually, considering that just a couple of months ago she would not jump into deep water without being caught. I think that spending at least 8 hours in the pool over a 3-day period provides a great opportunity for the kids to learn and experiment with new activities in the water, and all of them continued to improve their swimming abilities. It's quite amazing, really, to see how they can teach themselves and are inspired and encouraged by each other.

There was a mother in the pool before we left on Sunday morning, whose son was around the same age as Holly. Every time Holly jumped into the water the mother would tell her son to watch and make a comment expressing her desire for him to attempt the same thing, which he refused. At one point I heard her say "How will you learn to swim if you don't let me teach you?" I could only roll my eyes. I really don't expect mainstream parents to get it that kids are quite capable of learning on their own when given adequate opportunities. 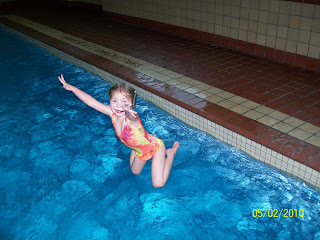 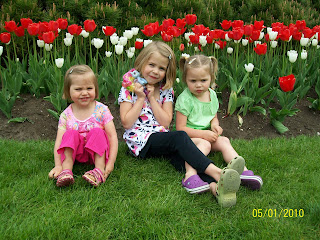 Holly and Anna spent a significant portion of the train ride colouring, drawing and reading, as well as most of their time in the hotel room (except when they were sleeping!). We had purchased some new markers, crayons and colouring books before we left. I had to acknowledge that, except for the hours spent swimming, they spent the 52 hours that we were away doing exactly the same things that they would have done at home. And I don't have a problem with that. I think that being a good traveller is a skill that children learn through experience. They are comfortable and content at hotels, in restaurants and on public transportation. I laugh when people refer to them as 'well behaved'; I always say "They're happy." 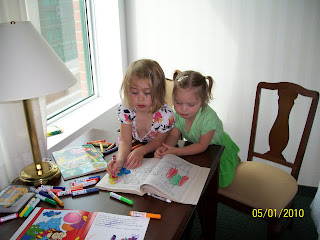 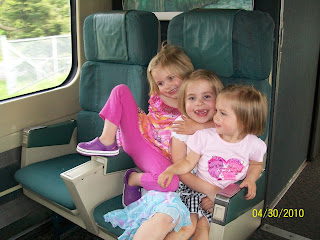 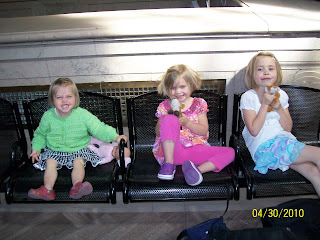 I think that the best part of the trip for me has been that Partner-Guy has told me at least 4 times in the last 4 days that he thinks it was a great trip. He didn't even blink while paying for taxi rides or ordering Swiss Chalet to be delivered on Friday night. He happily put on his still-wet-swimsuit no less than seven times and trotted down the hall to the pool with girls. He took them to the bathroom on the train too many times to count and he read the same 3 books as many times as they asked. It was a great trip. And I am so relieved that he doesn't consider it to have been a waste of money or not worth the effort.

Email ThisBlogThis!Share to TwitterShare to FacebookShare to Pinterest
Labels: Family Values, Living in the Moment, Partner-Guy