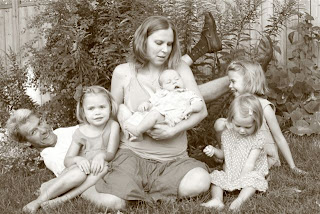 Yesterday I was nursing Julian while laying on the bed when he finished and pulled away and looked up at me. I gazed into his big blue eyes, grinned and asked, "Are you all finished?" Suddenly his little face broke into the biggest ear-to-ear smile, complete with double dimples. And just as suddenly I was choked with a sob and tears were filling my eyes. That first smile made me cry! It's the one that says "Thanks for the yummy milk, mamma. And thanks for holding me when I cry. And thanks for changing my diaper three or four times every night. And thanks for cuddling me and giving me lots of kisses and for rubbing my back when I need to burp. Yeah thanks, mamma, you're the best."


Rarely have I cried over something my children have done or said. In fact, it has been so rarely that I can probably remember each incident.

There was January 8, 2009. It was Jasmine's first birthday and I had taken all the kids to Sears for a portrait. When I came back home Jasmine was asleep in her carseat so I reached into the back to unbuckle Anna and Holly, then I opened their car door and went up to the house to unlock the door, leaving them to get out by themselves. Unpredictably, Anna climbed into the front seat and knocked down the parking brake, causing the car to roll back down the driveway and toward the street. I was behind the car as it started to roll and dashed to the driver's door, hoping to jump in and grab the brake. I managed to open the door but by then the car was moving quickly and I unable to get inside. I held the door and it bent back 180 degrees. I yelled to Holly not to move (she had been about to step out of the car) and then I watched helplessly as my car rolled into the street and across to the opposite sidewalk with my three children inside.

It just so happens that it was garbage day on my street and the garbage trucks roar up and down the street all day long. But as my car cleared the driveway and shot onto the road, the street was clear of all vehicles. In fact, I had an amazing sense of calm and I knew everything would be OK. My car came to rest on the garbage bins of my neighbour across the street. I ran to the house to grab my keys which were dangling from the lock in the front door and ran back to the car. Holly and Anna sat back in their carseats and I drove the car back up our driveway and securely pulled the parking brake. I took all 3 girls into the house, settled everyone into a snack and tried to phone Partner-Guy at work.

Then I cried. As I tried to describe to him what had happened and that the driver's door was demolished, I became aware of what a bad accident could have occurred and I was overwhelmed. He was completely unconcerned about the car and only concerned about what could have happened to the girls. No blame, either. He's a good guy.


There was the first day of school in September 2007. I had returned to work, 5 months pregnant with Jasmine, and Partner-Guy was at home with Anna and Holly on a 4-month leave of absence. That morning I sat at my teacher-desk at 8:30am, just moments before I had to go meet my class, and I fought back tears. Another teacher stopped by my room to see if I was ready to go out to meet the kids and at that moment I lost it, sobbing "I wish I were at home with my own kids." I thought I was making a huge mistake by being at work. I still haven't decided whether or not it was worth it. Yes, going back to work enabled me to collect Employment Insurance after Jasmine was born. But was the money worth it, when I consider the damage that it did to my relationship with Anna and Holly? I guess not. I think my tears that day were justified.

There was the night I put Anna to bed wearing pyjamas that had belonged to my sister Julia who died in 1974. Imagine my daughter asleep in my arms in the pyjamas of my mother's daughter who she would never cuddle and kiss and put to bed again. I sobbed long that night. I wept for a sister I never knew and for a mother whose pain I could never endure and for my own daughter who I would protect with all I had. I wept for lost possibilities and for heartache that can't be erased. I wept for a part of me that was buried in 1974.

I don't cry much.

I cried in April when my mother phoned to tell me that my grandfather had died. But I wasn't crying about him. I was crying about how I would not be able to attend the funeral because my heart can't handle the hurt of being in the same location as my brothers who have vilified me and want nothing to do with me.

And I cried in August 2009 when my brother moved from Toronto to London. He had lived in Toronto, not more than a few miles from me, for more than 2 years and I had not seen him. I cried because I had to give up the hope that everytime I saw a tall guy walking up my street that it might be him, spontaneously coming to visit me and meet my children.

I have a lot to learn about crying.
Posted by Patti

Email ThisBlogThis!Share to TwitterShare to FacebookShare to Pinterest
Labels: Family, Living in the Moment