I must be one crazy mommy. 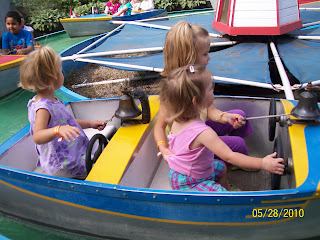 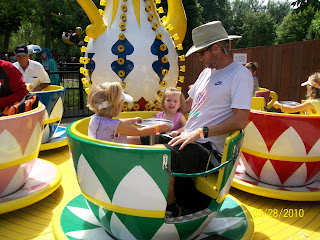 Centreville, unlike the Zoo, is not my favourite family outing. To start with, the family day-pass is limited to four people. We purchased the family pass for $80 which provided unlimited rides for Partner-Guy and the three girls. Then we purchased an additional pass for Partner-Guy's niece who accompanied us. I wonder how many other places and events we're going to find that discriminate against 'large' families.
I also find that the entire park, although it is supposed to be designed for families and children, is not very child-friendly. There is only one washroom which is located in the middle of the park. There is a splashpad for small children, but only one picnic table in the entire area, even though many people go there to eat. The area that has many picnic tables has absolutely no shade and is located in a busy 'intersection' in the middle of 2 rides and several carnival games. It is hot, busy and LOUD. Food to purchase is limited to hotdogs, fries, pizza and candy. (We always bring our own food on family outings anyway, but it would be nice to have options.)
It is also interesting that Centerville seems to attract a different kind of patron from the Zoo. Although there were lots of mothers at Centerville with babies (some even younger than Julian), I didn't see a single one breastfeeding. By contrast, at the Zoo I always see breastfeeding mothers. At Centerville, every stroller had bottles in the cup holders. I also notice that at the Zoo parents talk to their children. At Centerville, parents put their kids in a line to wait for a ride and then they stand back and talk on their cellphones. Or worse, they stand outside the rides and light a cigarette. The Zoo has designated smoking areas so that people observing animals are not subjected to the obnoxious behaviour of smokers.
I guess Centerville is attractive to people who are also patrons of the CNE, a place I would never take my kids. But I wonder why the Zoo seems to attract families who seem to be of a different ilk. The prices are similar and both locations are a good distance to travel. Nevertheless, the Zoo is simply a much more family-friendly attraction. And the atmosphere of the Zoo is so much calmer and happier.
Speaking of smokers, I observed another interesting thing at Centerville. I noticed a couple families of Mennonites taking their children on rides and I smiled at them, being quite familiar with their style and customs because I grew up amongst them in the area outside Waterloo. The couples were young--in their 20s--and their children were about the same ages as my children. Later, when my children were lining up for the Log Ride (in the hopes of getting a little wet), one of the mothers was also lining up with the children from both families. And the two fathers and the other mother were sitting at a picnic table smoking! Well, that gave me a good laugh! Here they are at Toronto Island in their suspenders and straw hats and funny beards and bad haircuts, dragging on cigarettes like pros! And might I add, that the mothers were wearing long dresses of such thin cotton that I could clearly see their fancy black undergarments. Yes, yes, I guess I'm being judgemental, but I can't help wondering about the whole mantra about being in the world but not of the world.
So now we've experienced our first attempt at trying to do something as a family, but without a vehicle that we all fit in. When we went to Waterloo a few weeks ago we rented a mini-van for 2 days at a cost of $85/day. To get down to the ferry docks we had two choices: TTC or taxi. Well, getting there by TTC would have added an extra hour at the beginning AND end of our day. We opted for a taxi and ended up paying $35 EACH WAY! We could have rented a van for just a few dollars more! But then we would have had to pay for parking, so probably the taxi was our best option. And $70 is a lot cheaper than the cost of buying and insuring a van which we don't really need. We maintain that there is no point in buying a van for Partner-Guy to drive to work everyday, leaving me home with 4 kids and no vehicle anyway. Better to keep the Honda Civic as his car for going to work and we'll just absorb the cost of a rental once in a while.
Julian, by the way, is doing great! He is a delightful baby and already he makes us so proud! I'm trying to capture a picture of his big toothless smile and I will post one as soon as I can.

Email ThisBlogThis!Share to TwitterShare to FacebookShare to Pinterest
Labels: Family