So what do we do all day?
My days are pretty busy with taking care of Julian--he gets held most of the day--making food and doing a little housekeeping. But Anna, Holly and Jasmine fill their days with play, play and more play. I still read to the girls for 60-90 minutes/day although some days it doesn't happen until after Julian goes to sleep at night. And now we play cards! I taught Anna and Holly to play UNO a few days ago, so now we can play when Jazzy is in the bath or already in bed for the night. I love it! The girls are quite competitive and they take the rules seriously which is an interesting aspect of their personalities that I had not seen before.

Here are some samples of their work: 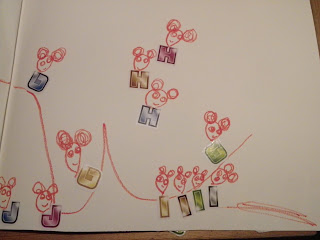 This is a sticker picture by Holly. She has used colourful letter stickers and embellished them in her own way. I thought she'd use the letters to make words but she had her own ideas. Never underestimate her creativity. 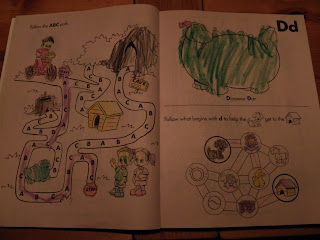 Holly is also working out of an activity book that my mom gave her for her birthday. She loves it! Her fine motor skills are improving and she is working on lower case letters. She recognizes all the letters but tends to write mostly in upper case. 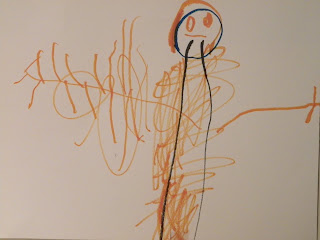 This is Jazzy's drawing of her dad running with his friend Des. If you can't see the second runner, don't feel bad--we couldn't either! She says that Des is behind Daddy. Not bad for a little girl who just turned 3. 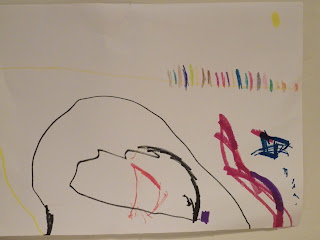 Another work of art by Jazzy. I liked how she made a pattern with that row of colours. 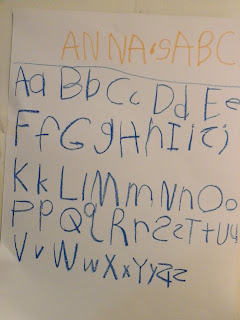 Anna's ABC. I asked her how she knew about using an apostrophe and she said that she "just knew." Magnificent. Yes, she has two backwards letters, but notice how straight her rows of letters are and how uniform the letters are in size. Also, she did this without any prompting and showed it to me only when it was complete. I was impressed!

Anna hasn't read anything aloud yet but when I am reading she often points to a word and asks if I read it correctly--and often she is right that I didn't read what was written on the page. I'm used to 'improving' stories as I read them and now she catch me changing words or leaving out whole sentences. She's keeping me on my toes. And I love it. Such an amazing girl she is.

Email ThisBlogThis!Share to TwitterShare to FacebookShare to Pinterest
Labels: Homeschooling