When a Man Wants to Die: A Eulogy for my Grandfather 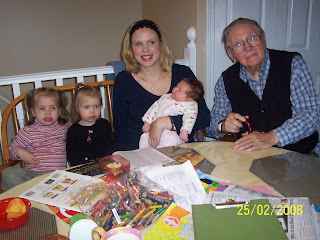 I last saw my grandfather in August.
A year and half earlier he had moved from his house into a retirement residence, and that is where I visited him, along with my daughters and Partner-Guy. In fact, Grandpa had moved into the retirement home on the same day that Jasmine was born, January 8, 2008 and coincidentally it was also the birth date of his wife, Meintje, my mother's mother.
One of the first things that Grandpa said to me at that visit was that The Crest was a great place to live if you needed to go somewhere to die. And he said that he was ready to die. He talked about how he had lived a long life and experienced much sorrow. He talked about his enormous regrets--primarily his marriage and divorce in the 90s--and how he felt that he had set a bad example for his grandchildren (only two of whom entered marriages that required divorce) and subsequently for his children, two of whom had separated from their spouses within the previous year.
At first I thought that he was being dramatic and self-pitying. But as I listened to him I could hear the authenticity in his words. I suggested that giving and receiving love from his children and grandchildren was surely a reason to live for, and he said that love can go on longer than an old man. He said that he didn't want to end up in a nursing home, unable to care for himself, or in a hospital, hooked up to machines and needing his children to make life-or-death choices on his behalf.
So I've had time to think about his death for the past six months, and I am not gripped with sadness now that it has happened. Rather, I am pleased for him that his death came exactly the way he wanted it to. And I am glad that I made the effort to go to his home in Drayton and to express my love to him face to face.
In that visit I also expressed to him how much I appreciated how he had many times been straight with me and how he had shown his interest in me by expressing concerns or asking very direct questions. That kind of honesty is uncommon in my family of origin, but not unwelcomed by me in my relationship with my grandfather. In fact, his forthright interest in my personal life has always made me feel important, special and loved by him. And I was never afraid to tell him the truth about my life; it never seemed to be the answers I gave that mattered as much as the conversation itself. For instance, he disapproved of my choice to homeschool my children, but his disapproval didn't make me feel that he was withdrawing his love from me, and his disapproval didn't come across as either disappointment or disrespect.

When I was about 13 years old, Grandpa took me to Conestoga Mall in Waterloo and bought me a sweater and then we ate together at the food court. He had seen me wearing a sweater belonging to my older brother and he apparently thought that I needed a sweater of my own. When I saw him in August he remembered doing that for me and he said that he had no idea what made him do that because he had never done anything like that for any of the other grandchildren. Well, I know why; he did it because I needed to feel loved and special and important and because getting that kind of attention from a grandfather is never a mistake.

I admit that I didn't know my grandfather very well and that the few adult-to-adult talks I had with him barely scratched the surface of what really went on in his head and in his heart. What I did know was that he really cared about his children and grandchildren. He loved as freely as he knew how. And he believed, as I do, that love goes on after the flesh has died.


During the summer of 2004, when Anna was just a newborn, Grandpa expressed interest in visiting Toronto, so Partner-Guy and I facilitated his visit. My mother drove him to Milton, and Partner-Guy picked him up and brought him to a Howard-Johnson Hotel not far from our home. The next day, Partner-Guy took him on a tour of the city, visiting all the places that Grandpa wanted to see. They went to Queen's Park, parked outside the front doors as if they were a couple of dignitaries, and went inside. Grandpa spoke to everyone he could find to tell them bits and pieces of his life story, including his first visit to Queen's Park many years ago. He also wanted to go to the Old Spaghetti Factory, where he amused the waitresses with his epic reminiscences. In the evening he took Partner-Guy and I (and baby Anna) out for supper and he told me great stories about the births of his brothers and sisters, the 2 times he was ever drunk, and his experience of the death of my sister in 1974. He also encouraged me to breastfeed my baby (!) which I will never forget.

I think my grandfather will be remembered as a man who loved his family. That doesn't mean he was a perfect father or grandfather, but it was always his intent to take care of his family and be available for them. I will remember him for taking an interest in me, for speaking to me honestly and openly and for being able to acknowledge his weaknesses and mistakes. Those are qualities I admire in a man.

Thank you, Grandpa, for being a source of love in my life and for living your values.
Posted by Patti