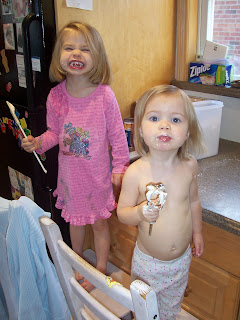 (This week will feature a 5 part series on what I hope my children will learn as a result of learning at home.)

Lesson #1: Science is not a subject. Everything is SCIENCE.

I'm not sure how I went to school from age 5 to 22 and I don't know anything useful about the domain of science. In fact, not only do I not know anything useful, I don't even remember what we studied. I have some vague recollections of dissecting a fish in Grade 9 and of doing a science fair project in Grade 7 on the necessary conditions to make yeast rise.

What I didn't learn in school (either because it wasn't in the curriculum or because I simply didn't retain what was taught) is staggering. Among the science-related questions I have recently considered are:

What is air pressure?
How do I obtain the right humidity level in my house?
What are the different kinds of clouds and what do they have to do with the weather?
Why does washing clothes in hot water 'set' the stain, and how do I get mustard out of cotton shirts?
What's the difference between baking soda and baking powder and why can't they be used interchangeably and why do some recipes call for both?

At our house, science is going to be based on inquiry rather than facts. In other words, it's not about answering the question, it's about asking the question. Anna and I have a lot of conversations like this:

My experience as a teacher (1996-2004, 2007) has definitely left me with the impression that schools do not do nearly enough to cover the science and technology part of the curriculum. The current trend is that every aspect of the curriculum should be tied into literacy development. This means that the 150 or so minutes per week that the students spend 'studying science' is dedicated in large part to reading and writing. I think this is backwards. I think science should be the context in which all other subjects are explored and that kids should have real life science experiences like cooking, gardening, and animal care everyday, especially in the primary grades. Children used to learn these things just by participating in life with their parents, after all.

The manner in which technology is explored in schools is beyond pathetic. The average elementary school student spends less than 30 minutes per week engaged in activity using modern technological equipment. Outside of school they can all use cell phones and digital cameras and MP3s, but they've never made and edited a video about the classroom gecko or used computer-assisted animation to make a comic strip about recycling. They spend hours and hours in school practicing cursive writing but they've never used a voice-recognition computer program to 'write' a story. What decade are they going to school in?

Anyway, my point is that if I'm raising my kids in the post-industrial era, I'm not going to let them waste their time on activities that were important if they were going to be stenographers in 1955. And they aren't going to learn science out of a book. They are going to spend their time exploring the world around them, with access to appropriate technology whenever necessary.

I expect they'll ask for telescopes and microscopes before they ask for their own cell phones.
PHOTO: Anna and Holly explore science in the kitchen, December 2007
Posted by Patti

Email ThisBlogThis!Share to TwitterShare to FacebookShare to Pinterest
Labels: Homeschooling